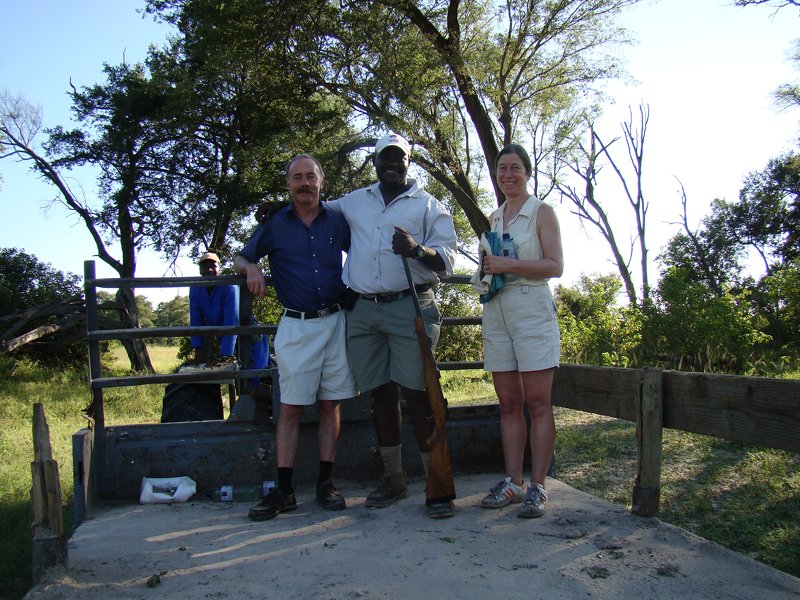 There is no better way than really getting to know the nature and your surroundings than going on foot. It is amazing what can be discovered by sneaking around with an armed guide rather than being high up in a noisy vehicle. Although many visitors feel nervous about this and also prefer to be driven rather than walk there really is no other way to learn about the ecology and the environment. Walking guides have special training and licences in Botswana to carry out this activity. Follow their instructions and do exactly as they say when in a tight corner and it is relatively safe. If they say ‘don’t move’ you don’t move. If they say ‘run like hell’ you run like hell. If he has just disappeared over the horizon at the speed of a cheetah you also run like hell. Seriously, these gentlemen are so attuned to the bush that they pick up all the signs of any danger from the birds and mammals around and steer you away. For example; a giraffe with its height advantage acts as a lookout for other animals. It will always be staring in the distance towards any threat. The birds make their alarm calls and the smaller mammals pick up the scent and start running away. 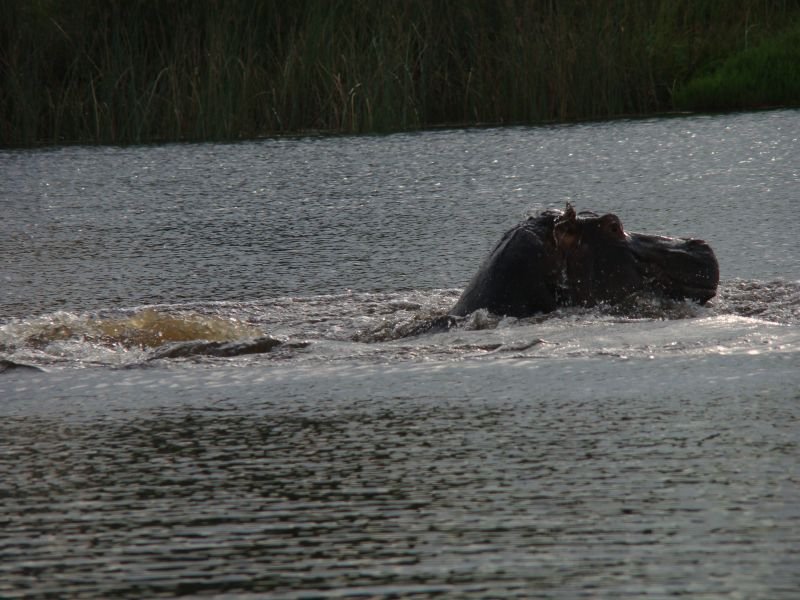 On this morning we had asked to go ‘walkabout’. One advantage is that you can’t start too early as you have to wait until the hippos have left the grass areas and gone to wallow in their lagoon for the day. The hippopotamus amphibius has the reputation of being the most dangerous and fattest mammal in Africa. A mature male can weigh up to 2,000 kg and has incisors up to half a metre in length. These are of course no good for nibbling at grass which is the only thing they eat but make fearsome weapons. It would be easier to argue with your mother-in-law than a hippo, believe us! You can’t threaten to cut off a hippo’s sherry allowance. They get their own way and can be very aggressive. At one concession we were at there was a very aggressive male which kept attacking the mokoros (a traditional dugout canoe). 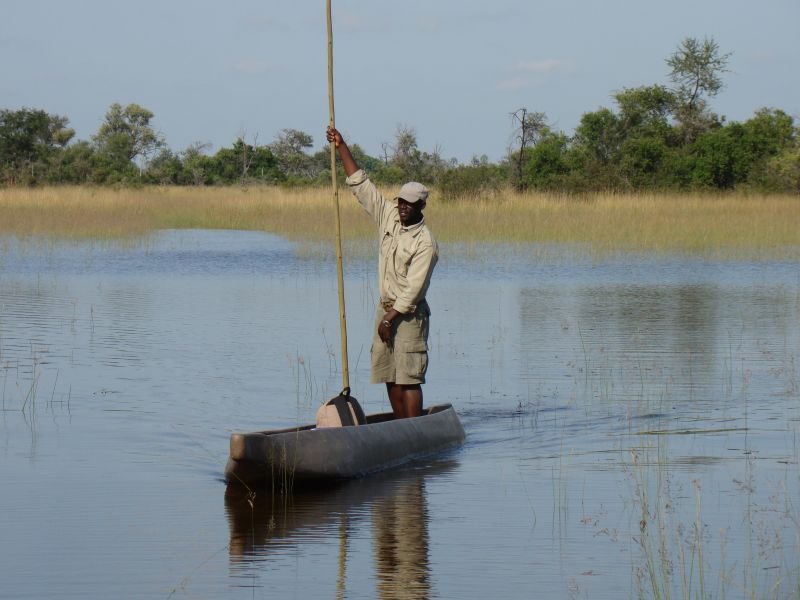 We had an extremely close encounter with this one last year and our guide almost had to shoot it to protect us. Unfortunately over the summer it went one step too far. The mokoro guide tried to get to the edge of a channel to let this attacking hippo past but it continued the attack. They were glued against the bank and it was still coming for them. They got out of the mokoro onto an island and ran behind a tree. It came out of the water and chased them on land. This is almost unheard of. Once you give them their territory back they usually leave you alone. Unfortunately the guide had to shoot it to protect his guests. This is obviously very sad as, after all, it is their bush and water, we are the intruders. Having said that we hardly know a single guide who has had to do this. The guides are experts in reading animal behaviour, seeing the signs and avoiding confrontation. 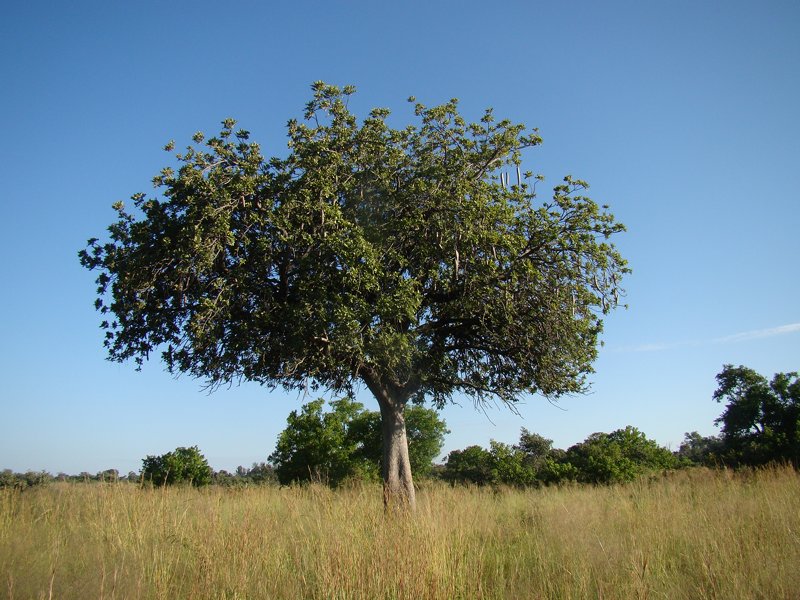 A sausage tree with fruits

Stephen had suggested that we should leave at eight o’clock and do a circular walk around the lagoon starting and finishing at the lodge. All the other guests had already left to go bouncing around ticking off their ‘wish lists’. After a late breakfast we set off with three bottles of water, a camera, a guide and a big gun. We avoided walking under a sausage tree (Kigelia africana) just outside the camp. These trees have extravagant crimson flowers with a pungent scent and are pollinated by fruit bats. Baboons feed on the ‘sausages’. The pods are also used to ferment beer. It is however not advised to stand under these trees as the long pods can be as long as one metre, weigh up to six kilos and have a pointed end. At one camp we stayed at an antelope was killed by one of these missiles. 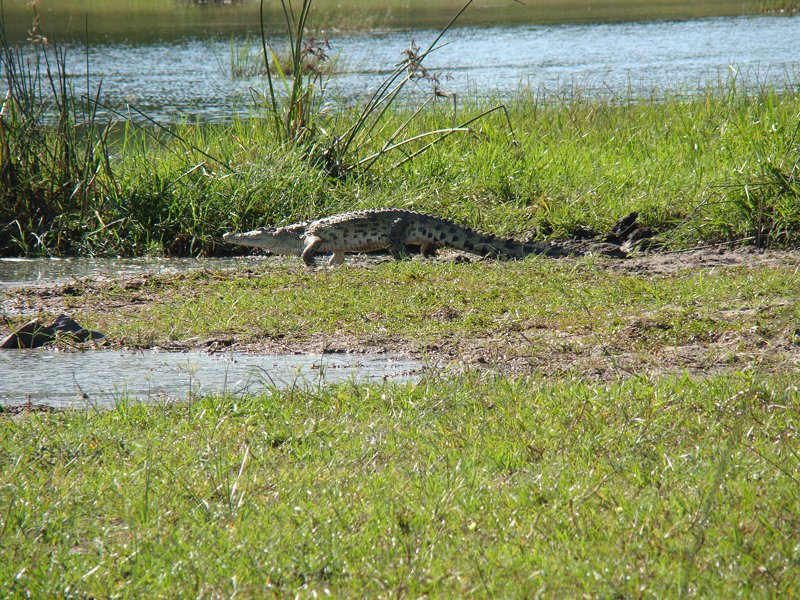 A crocodile heads for the water

We hadn’t gone more than 50 metres when we came across a crocodile (Crocodylus cataphractus). These are amazing reptiles and in abundance in the delta, we have seen many. It is Africa’s largest reptile with the male growing in excess of 5 metres in length and weighing over 1,000 kg. It is the last remaining descendant of the Great Archosaurs that roamed the world 150 million years ago. Not many people know that due to its anatomical features, for example a four chambered heart, it is actually more closely related to a bird than a reptile. So you are frightened of a big bird? Pathetic. This croc was some distance away and on the edge of the lagoon. They are actually wary of humans and will not chase you across land or launch themselves into a boat. Most attacks on humans occur very close to or in water. 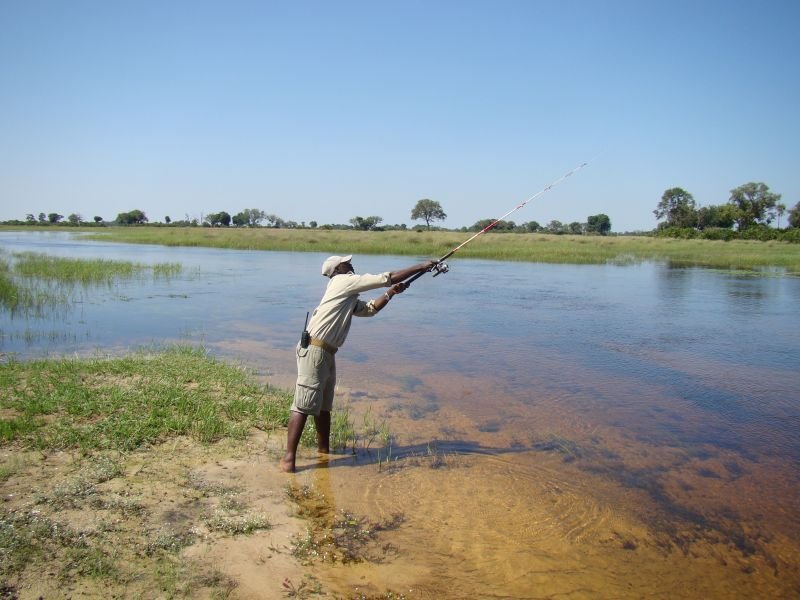 Not the safest way to fish

If you go swimming in a lagoon you would be pretty stupid so why not look stupid and tuck a ball point pen behind your ear. When attacked, if you have an arm left, stab the croc in the eyes with the pen or indeed any other sharp object available. Failing this you push your arm down into it’s mouth and lift up the soft flap of flesh at the back of its throat which acts as a valve to stop water going in. If he tries to roll over and pull you down he will drown or let you go. This is the theory anyway. So, we stood still and this guy just launched himself into the water. The bird life around the lagoons is incredible. There were the African darter, which looks like a cormorant, herons, egrets and storks. 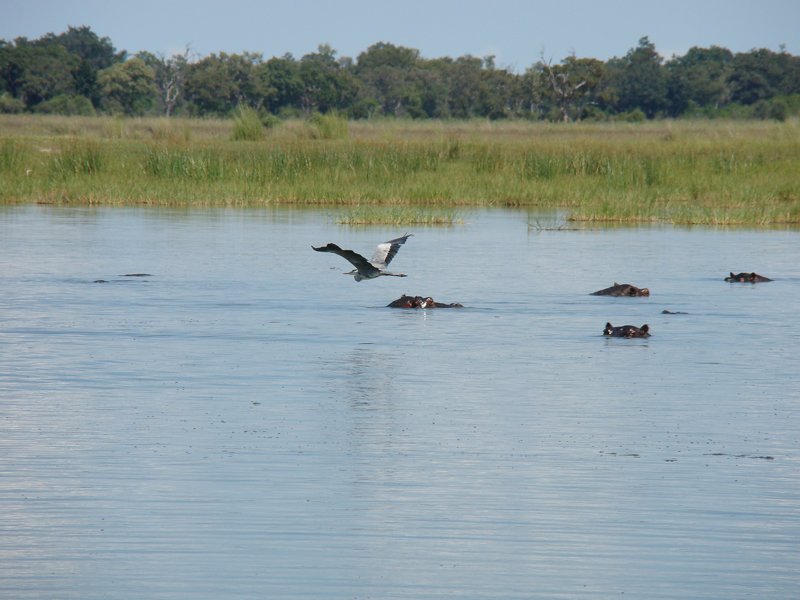 Walking silently we managed to get quite close until they launched themselves into the air. All the hippos were in the water. They are no threat unless you surprise them or get in their way. Never get between a hippo and water. Walking along a tree line we heard a disturbance, obviously something very large. About 50 metres away a large lone male elephant wandered out of the trees. He saw us but he didn’t want us to be there. As we stood there, very still, he turned sideways on and looked at us out of the corner of his eye as if to say ‘please go away and I will pretend I didn’t see you’. We sidled away and walked around the copse. Why didn’t he stay where we left him? He went clockwise around the copse and we went anti clockwise. Five minutes later we came around a corner and there we were face to face much closer on this occasion. This time he looked at us as if to say, ‘I have warned you once’. Stephen said quietly, ‘you are not going to run are you?’ I said, ‘you are the guy with the gun we are not going anywhere’. Jumbo stared at us flapping his ears. The first main warning is a ‘mock charge’. 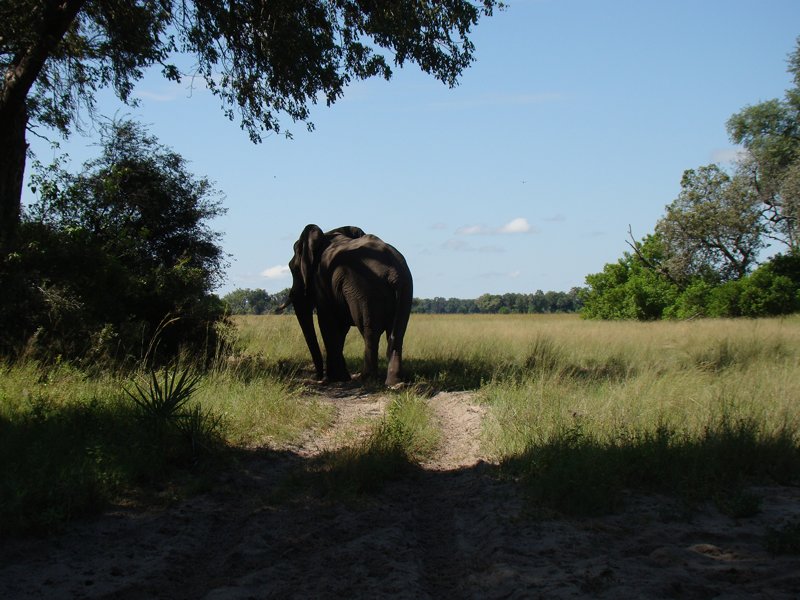 Elephant ambling away from us

We have experienced them before but never on foot. They charge you with head up flapping their ears and make a heck of a noise but stop short. With a full charge he will put his head down and ears back and will not stop. With a mock charge you stand your ground and when he has had his say you back off slowly. With a full charge this is one of the very few times in the bush that you run. However an elephant can run faster than a human so you have to aim for a termite mound or tree to get behind or climb up. To be honest we weren’t even very happy about getting a mock charge from this double-decker bus, what if his brakes didn’t work? After staring each other out for about five minutes he turned slowly and ambled away. We backed away and headed back to camp where Alvin a visiting senior manager from H.Q. heard us approaching and already had two cold Savannas poured for us on the bar. 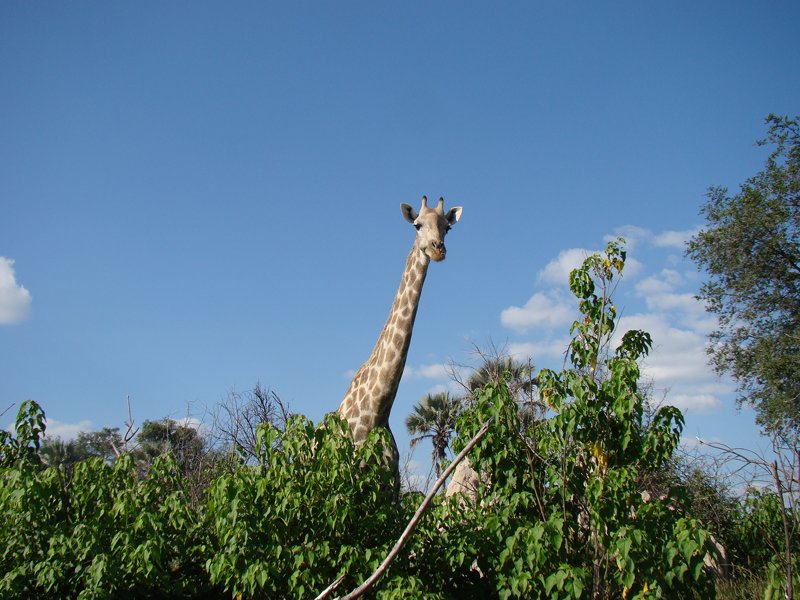 ‘That’s OK, they are not lions’

We decided to go out to play that evening. We were fortunate enough to meet up again with the pride of lions that we had seen the previous morning. Lions (Panthera leo) are Africa’s largest cat with a male weighing up to 240 kg. The female is much smaller, in comparison, weighing in at up to 150 kg. The male stands up to 1.2 metres at the shoulder. They are the country’s top predator, their preferred prey is medium-large herbivores such as wildebeest but when hunting as a pride they will take out animals as large as a buffalo or giraffe. Logically, their prey depends on what is available in their particular habitat. They have been known to climb trees to chase baboons.

Not the safest way to fish

In desperation they can even prey on a porcupine. They are the most social of all cats with an average pride consisting of 10-15, sometimes even 30. A pride consists mainly of females and same-age cubs together with one or two adult males. Young males are driven out after about 15 months. We followed them for some distance and then at dusk we broke off to find a nice spot for sundowners.

As is the style of these safaris, they set up a full bar for you in the bush. A table is laid with a cloth and a whole range of spirits, wines, beers and soft drinks are offered. Dishes with canapés, nuts and dried fruits are laid along side.

After refreshments we carried on and picked up the pride again and followed them with the aid of a spotlight well into the evening.