Frogs and a Route March through the Bush 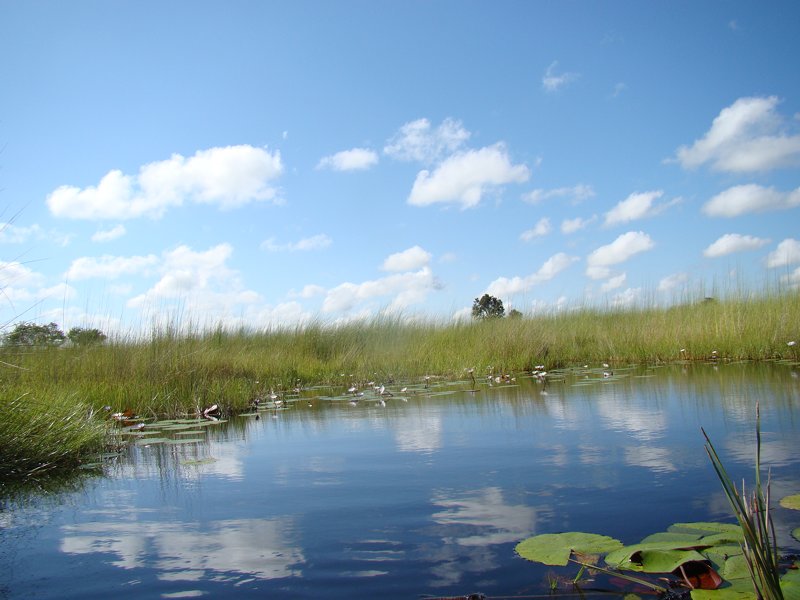 We felt like a gentle morning drifting through the reeds of the lagoon in a mokoro. To justify this we felt that we should ask for a walk in the evening. The problem was that they had no guide at the camp at this time who was qualified to carry out walking safaris. They had a few guides who were experienced enough but were just waiting for a place on the course that is followed by a very tough examination. The company negotiated with the next camp, Xaranna, two hours drive away to bring in a walking guide for us for the afternoon and evening. We thought that this was very decent of them just for the two of us. I decided that as the camp was fairly quiet and they have a staff fitness programme this would be an ideal opportunity to exercise the staff. At breakfast I ordered them all, management, chefs, waitresses, maids, gardeners and a few baboons to prepare for a route march that evening. They were to report at four o’clock, booted and spurred with no excuses! We were not quite sure what the reaction would be especially from the management as they were supposed to be in command. So we escaped in our mokoro!

As mentioned earlier the water was rising in the Delta. There is a critical time when the water is high enough to be able to have a greater range and opportunities in boats but not too high to flood roads and airstrips. We had judged it perfectly. They had just moved the mokoro station from an area where they could only use narrow channels to a region of flood plains which had just flooded. We started off at their football pitch which was a metre underwater and glided between the islands. 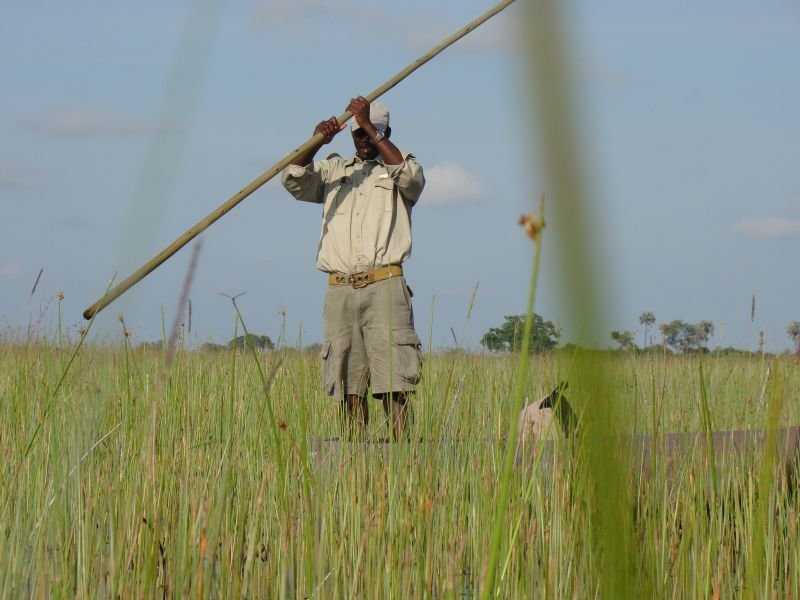 Our guide looking for his football

Many of the islands in the Delta are mounds formed by the Macroternes michaelseni termite. The Delta floods in an erratic way which sometimes gives the termites time to build a mound or other mounds form before the area floods. Protruding from the water the termites can survive and birds perch onto it dropping seeds. In time these seeds germinate and trees grow, predominately wild date palms (Phoenix reclinata) fertilised by the guano. 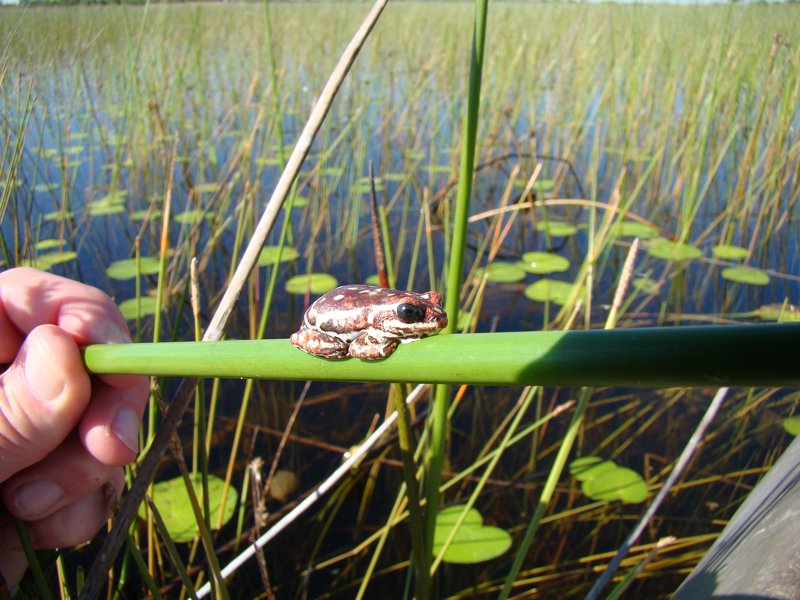 I have always liked frogs so this was a frog hunt. Some of them are so small they are very difficult to spot but we were pleased to see some painted reed frogs (Hyperolius marmoratus). They are actually quite common but there are nearly 100 subspecies recorded. The juvenile is olive-fawn but they grow up to be bright and multi-coloured. Our tracker was poling our boat and he was very patient with us. Every time he just got into a rhythm and some momentum going we had to stop to photograph a frog. Our guide had the easier job of poling the bar boat. Miss Gin and Dr. Tonic just wanted to get to the first big island to be put into glasses with some ice and lemon, they weren’t bothered about frogs. 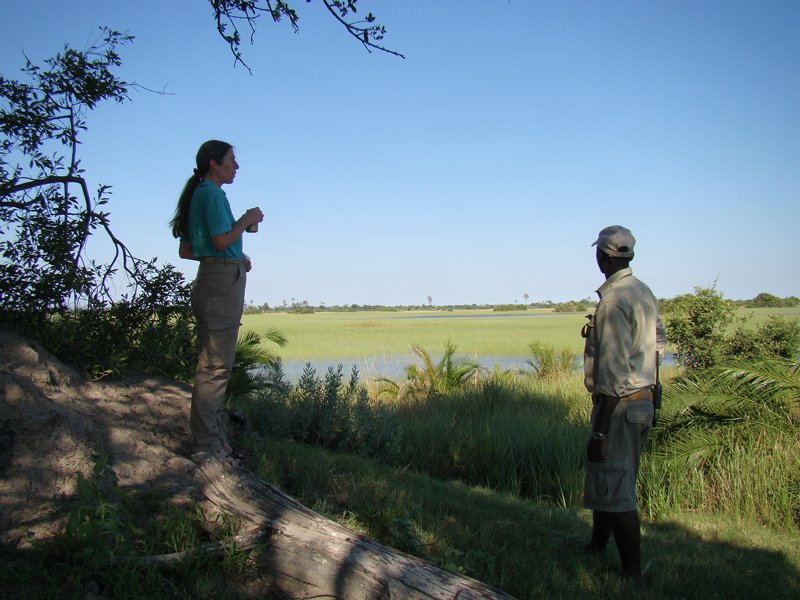 When we got back for lunch I had expected a mass escape by the staff. There is no fence to get over but the guards are lions and leopards in the bush so they were still there and seemed very cheerful. The management asked what taking their staff for a route march was all about. They said it was a good fitness programme idea but it’s not company policy to allow camp staff out to play along with the guests. We said it would be good for them to see the guides in action and maybe learn something about the bush as well. We won. 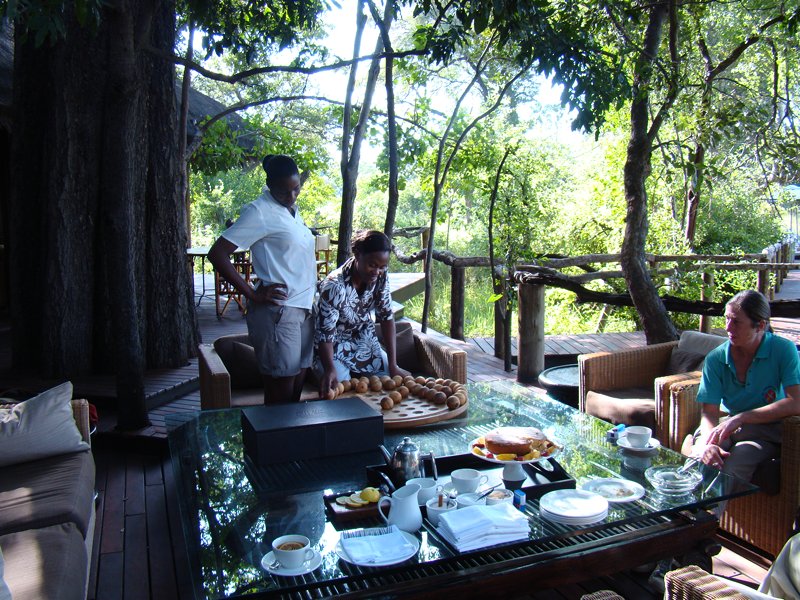 Our guide Rams arrived from the other camp and we had tea together. I explained the situation to him and he thought that it was a great idea. The appointed hour came; we met in front of the lodge. The only member of staff there was the assistant manager, Joyce, booted and spurred. I said, ‘why are your staff not obeying my orders?’ Joyce said, ‘they are just coming’. One by one they came out of the bush from their quarters. One, after another, after another. All staff, not on essential duty, had turned up, smiling and laughing. I think the baboons were on siesta. 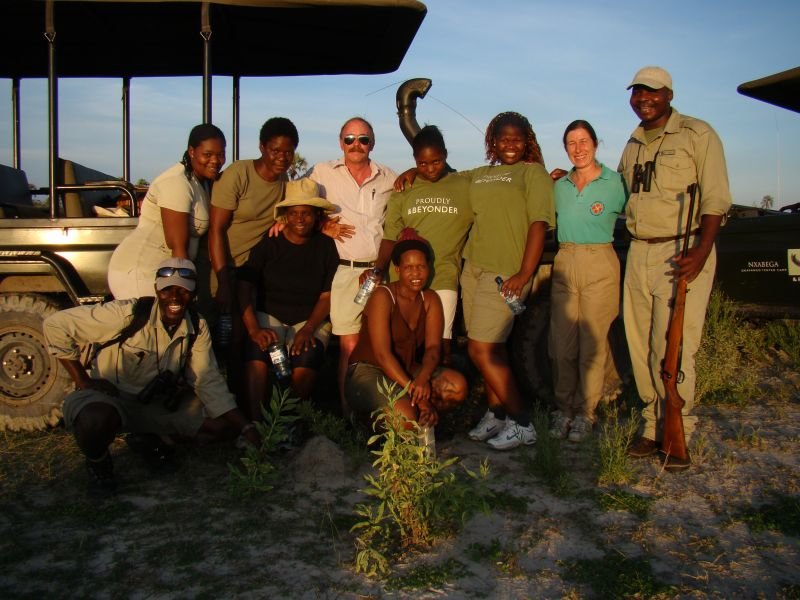 Unfortunately for safety reasons there is a company limit on numbers per armed guide which is logical. The general manager had to come out to sort out the mess we had caused. I just wanted to take all the girls but the management and my wife vetoed that plan. I got my own way in the end as the few chaps chivalrously stood down, as did Joyce. She had in fact been walking with us on a previous visit and she was in for even more excitement (that she didn’t know about) the following day. Rams gave the walking safari brief. We don’t normally get subjected to this as they know that we know the drill. It was very good to see that everyone was taking it very seriously and listening intently. Although when he came to the emergency drill he forgot about the bit where you are supposed to say ‘cross the tapes around your front and tie in a bow behind you’. We were going to walk for about three kilometres and then be met with sundowner carrying jeeps and driven back. 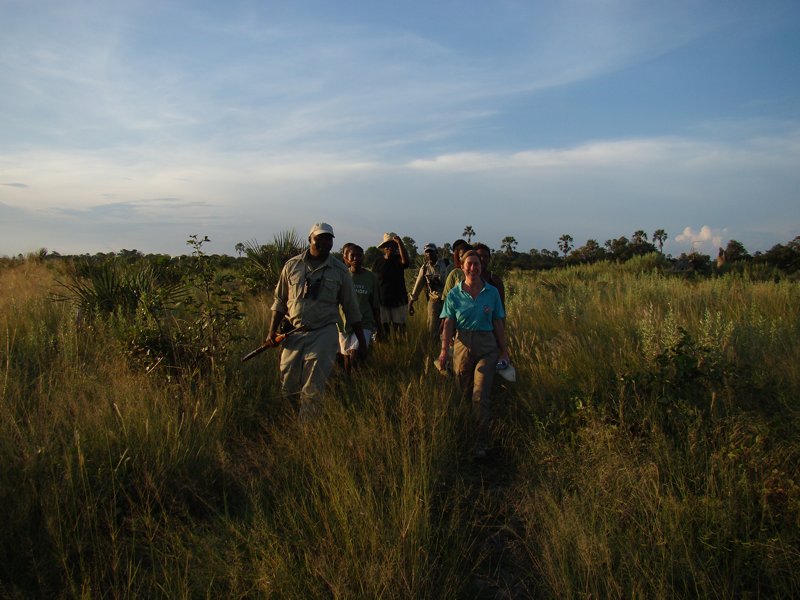 So we set off as instructed. Two single files, no more than an arm’s length apart, behind the gun (Rams) but in front of the unarmed guide (Master) behind who was there to pick up the bits. It was a wonderful walk as always. We thought that the staff would know a lot about the bush. Rams quizzed us all. They were quite knowledgeable but I suppose if you are brought up in a city and just live enclosed in a camp for three months at a time you still have much to learn. They loved it and we all had great fun. We looked at tracks, flowers, bushes, trees and holes. Some idiot stuck a twig down one to be told it was a scorpion hole. I will not do that again! We learnt all about the uses of the various herbs, barks, roots and grasses. We stood silently and listened to the bush identifying various signs and calls. 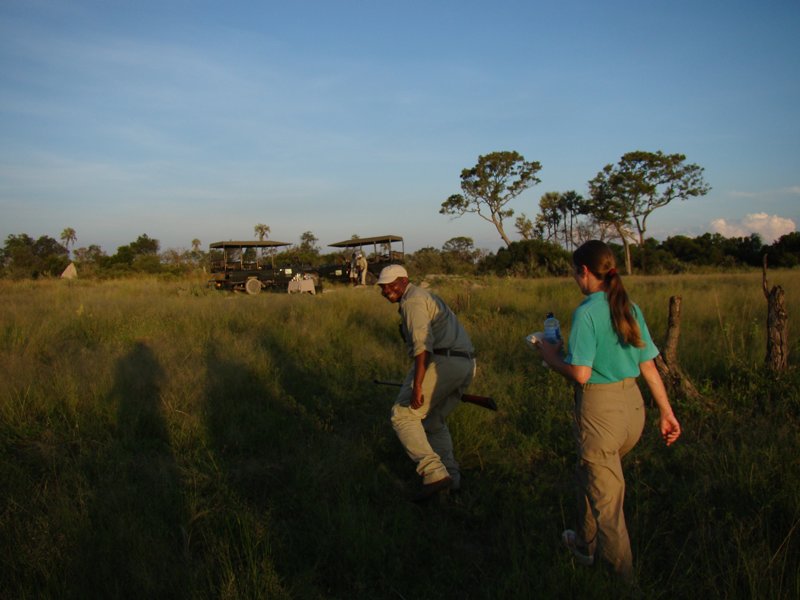 Our final mission was track down the sundowner vehicles. We stalked them, caught them and all watched an amazing sunset together.

We were the only couple for dinner that night so they asked us where we would like to dine. They even offered to serve us on the terrace of our tent which was a considerable distance to carry everything. We opted to be by the swimming pool in lamplight. Company policy is that at dinner one of the senior management should be present and dine with the guests. We said, ‘for goodness sake, take the evening off’.