Every Day is different 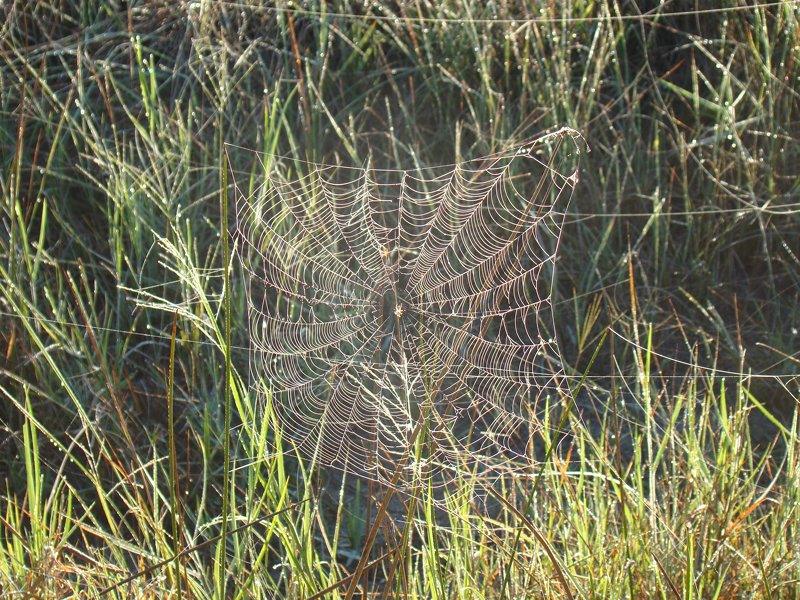 Spider's web in the morning dew

Many guests only stay at each camp for one or two nights so the staff try to cram in as much as they can for them in a day. The plan was to drive around for a couple of hours and stop about a kilometre from the boat station to walk there and then go in the mokoro. We set off as the sun was rising through the early morning mist. The grassland was a mass of spider’s webs as far as the eye could see. The low sun picked out the dew on the webs. It was as if the whole landscape was covered in lace. Our tracker picked up some elephant tracks. These were particularly well defined in the sand and one could quite clearly see the difference between the larger front feet (to support the weight of the large head and tusks) and the smaller back feet. Where the two elephants had dragged their trunks looked like Land Rover tracks. We found a herd on the move. 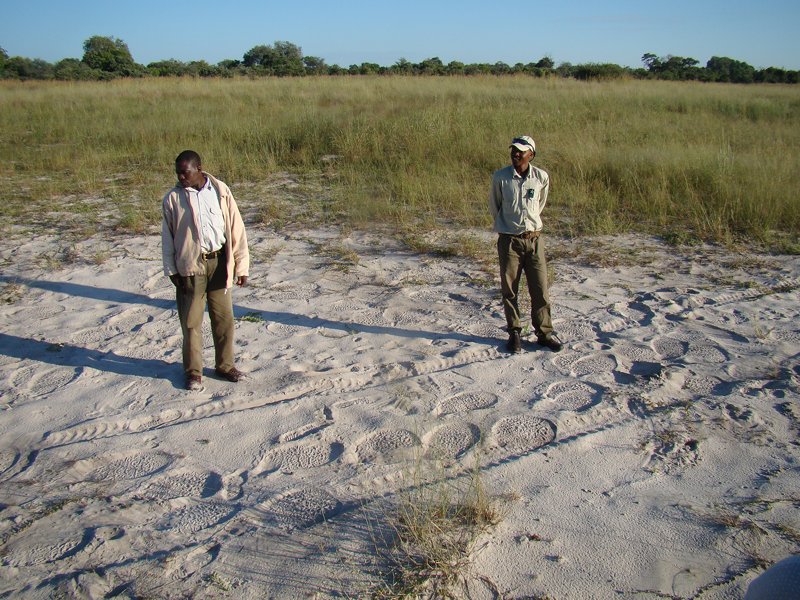 The African elephant (Loxodonta africana) is the world’s largest land animal. A bull can weigh up to six tonnes and stand four meters high at the shoulder. The trunk is the world’s longest nose and can sniff out food or danger many kilometres away. The tusks have a dual purpose; weapons and tools to dig out roots or to split open tree trunks. The large ears also have a dual purpose; that of providing acute hearing and also as large fans to keep them cool. Elephants are vegetarian and a large bull will eat over 150 kg a day. They spend half their time eating both day and night. It sounds like being on one of these safaris! They gather daily to drink and will down up to 200 litres in one session. Also sounds like being on safari! 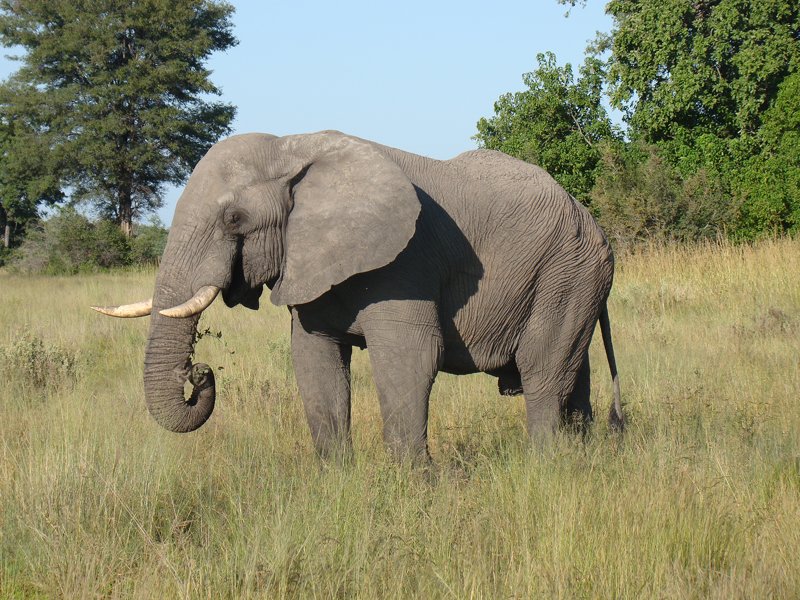 Elephants cause more destruction to the environment than any other mammal apart from man. This is one of the reasons that they have been culled in the past. Botswana does not cull. The fallen trees provide food for other herbivores and quite often new trees grow from the roots. The dung enriches the ground and the undigested seeds and nuts germinate wherever they fall complete with their own fertiliser. Elephant society is matriarchal. A breeding herd is led by a dominant female with her offspring and other related cows and youngsters. Adult bulls gather in bachelor groups. It is not unusual to find a herd of several hundred but each family maintains its identity within the herd. We found the herd, it was actually relatively small. We followed these magnificent beasts as they lumbered through the bush. After a kilometre we came across a herd of tsessebe (Damaliscus lunatus) which are the fastest of all antelope, indeed its name means ‘speed’ in Setswana (the official language of Botswana). 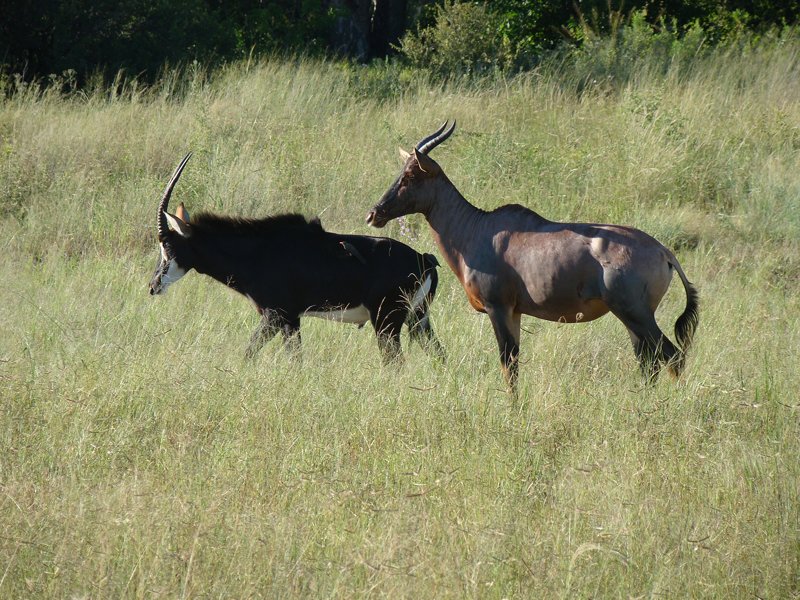 But, amongst the herd was one of their cousins, a Sable antelope (Hippotragus niger), which was a very rare sighting. They are extremely timid and usually run away at the slightest disturbance. This is probably not a bad idea as trophy hunters have considerably reduced their numbers in the past. It is very difficult to get a decent photo of this impressive animal apart from the hindquarters as it disappears over the horizon. It stood still and looked at us for about five seconds. 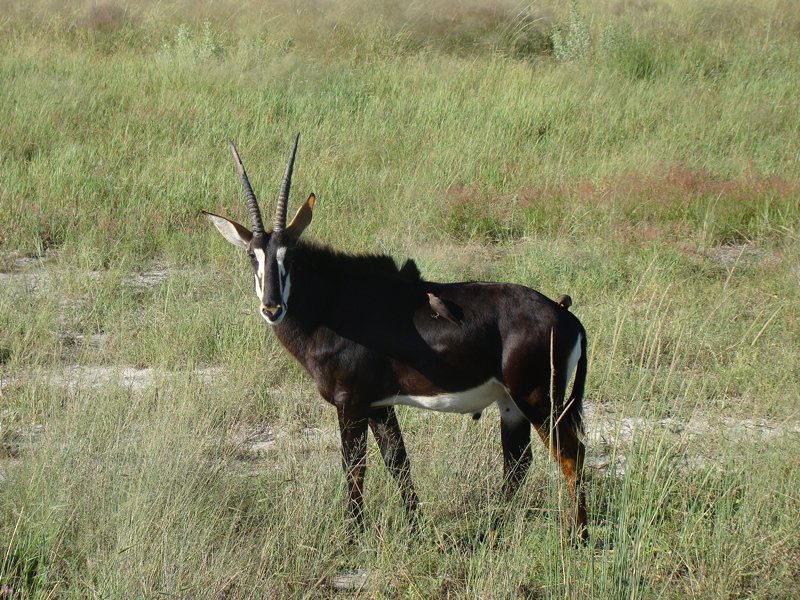 The sable being inquisitive

Our guide said ‘be quick with the camera, he will be off like a shot any second’. He did move but not quickly and did not go away. He came over and stood staring at us just eight metres away for about three minutes. He had his little flight of oxpeckers on his back picking off the ticks. After he had put us on his ‘tick list’ he just wandered away. 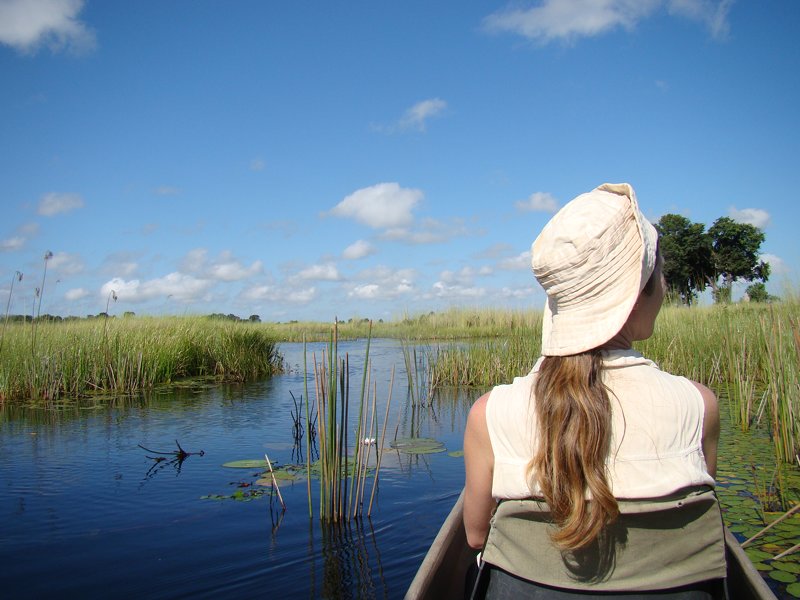 Gliding through the lilies

Our guides said they had never seen such bold behaviour from one of these animals before. We love it when even our guides are impressed. Then it was time for a walk to the boat station. It was very short and not very adventurous as we had other people with us who were not used to walking in the heat or particularly interested in close encounters on foot. After gliding through the lilies in our mokoro for an hour it was time to go back for lunch. 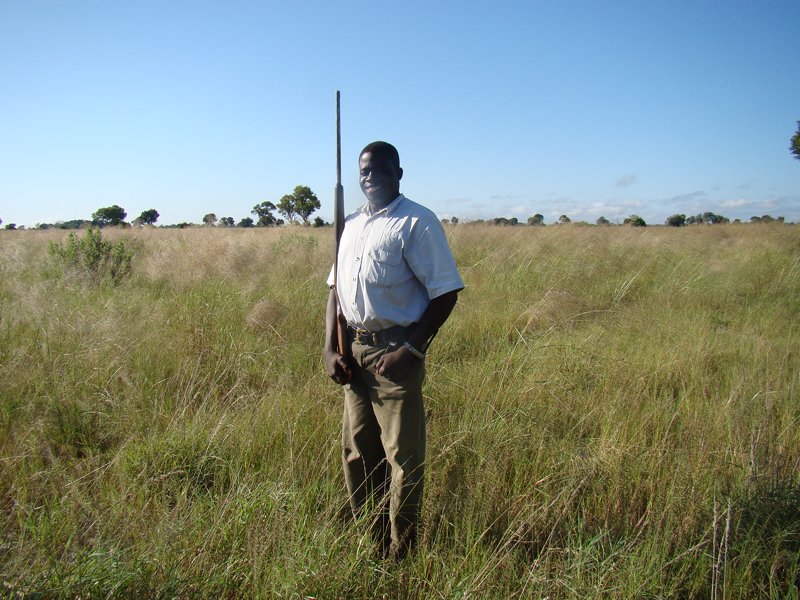 That morning another group had spotted a female cheetah with three cubs. The evening schedule was to try to locate them and then go on a long night drive. We wanted to see the cheetah but although night drives are very interesting we find them very tedious after a while. We had been allocated ‘The General’, as he is known, for the day. I don’t think that the management were very happy but we negotiated with Stephen to take us out on our own in another vehicle to find the cubs and then take us on a short night drive back after sundowners. 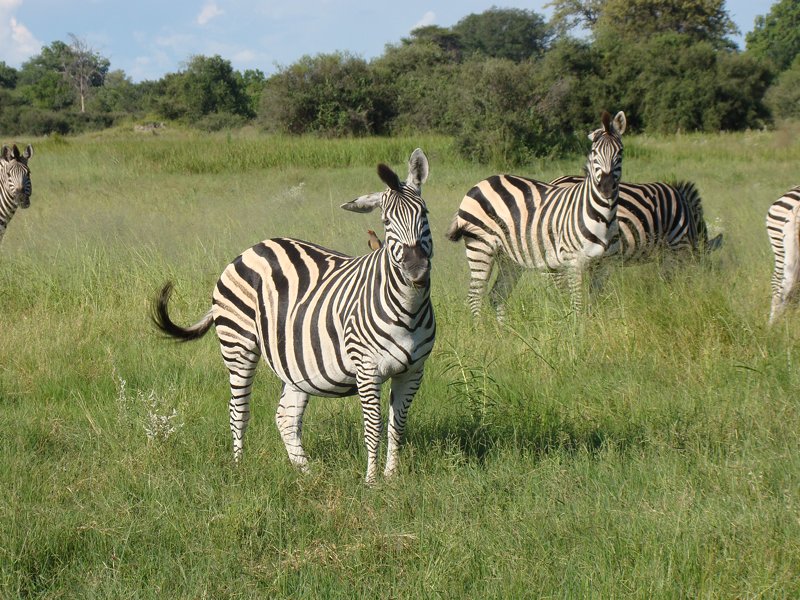 It was a long drive to the location and with our incredible luck it was a great drive. We hadn’t gone far when we spotted a herd of Burchell’s zebras (Equus burchellii). They are fairly common but still impressive. Each of their markings are unique like a fingerprint. There are different theories for the reason for their markings. Some say that it is camouflage in long grass. However they stand out very clearly in lush grass. The preferred theory is that the stripes confuse a predator trying to pick out an individual one in the herd. Amongst them were some giraffes (Giraffa camelopardalis). 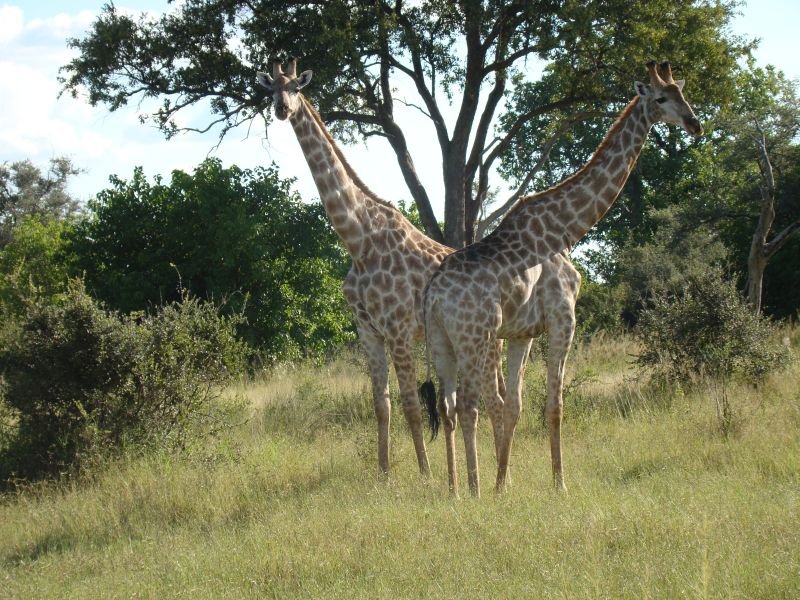 The giraffe is the tallest animal in the world and has the biggest heart. Males can be over five metres high and weigh over 1,200 kg. Like the zebra each individual has unique markings. They spend even more time eating than the elephant, 15-20 hours a day. Their long tongue can deftly pluck leaves and flowers from the tops of trees where there is no competition for their pickings. Their long eyelashes protect their eyes from the thorns and ants. 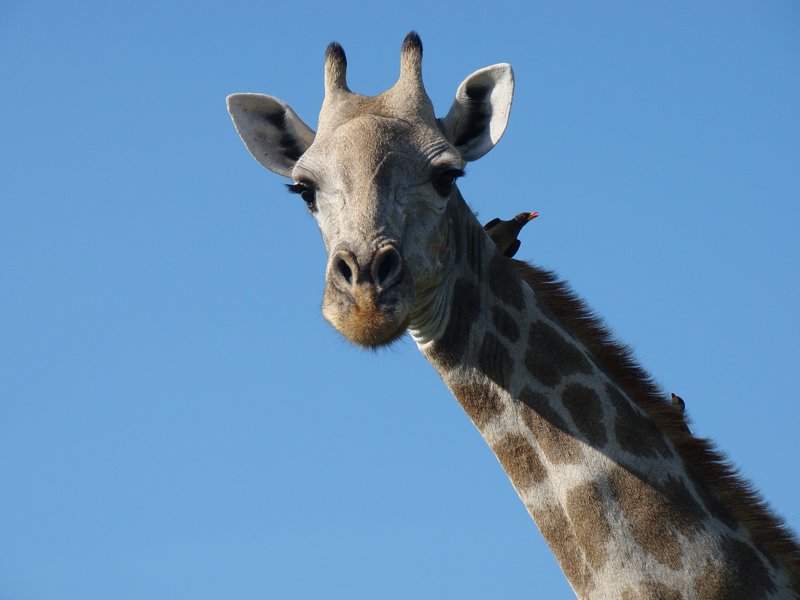 As mentioned earlier giraffes with their height advantage and excellent vision make excellent lookouts for the other animals. A herd of giraffes all looking intensely in one direction is the sure sign of a lion, their main predator. A little further on we came across some ostriches (Struthio camelus). 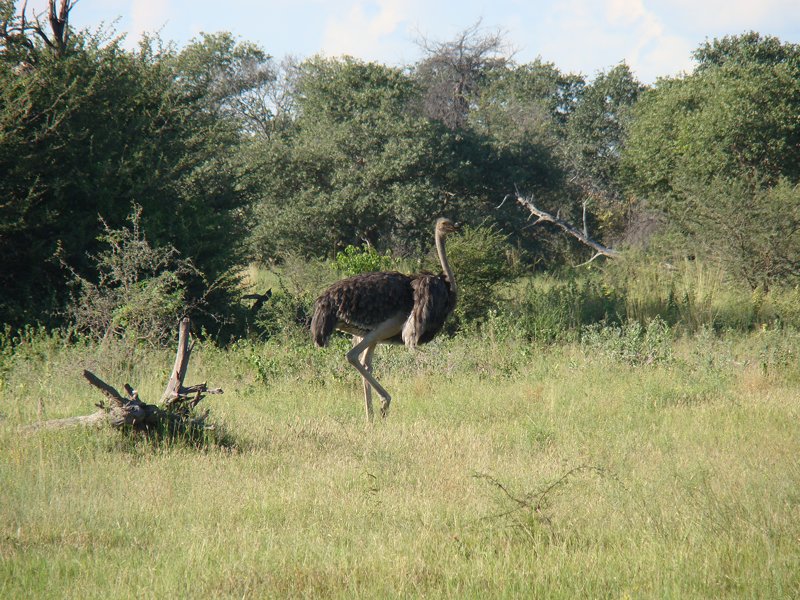 We hadn’t seen ostriches before in this area so it was a surprise viewing. More superlatives; the ostrich is the largest feathered creature on earth. A male can weigh more than 80 kg, stands two metres tall and can run at up to 60 km/h. And, they are very tasty. Ostrich is often on the menu for dinner at the camps but it is obviously farmed not from the wild. Indeed, most of the ostriches seen in the Delta these days have in fact descended from domestic stock. The female will lay up to 30 eggs at a time each one weighing more than one kilogram, each is equivalent to 25 hen’s eggs. Cheetahs and lions will occasionally prey on the ostrich but they are very good at defending themselves with a very powerful kick. It is the eggs that most predators go for. 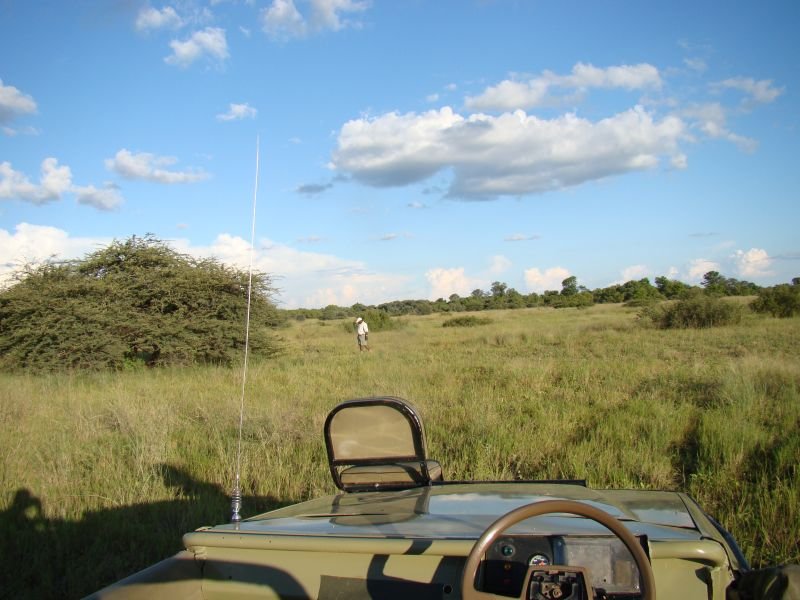 We were still on the mission to find the cheetah and her cubs. After a long drive we went to the place where she was seen that morning. We were not as lucky as we had been with the three brothers. She had moved on. This required some very skilful tracking. We enjoy tracking and find the skills fascinating. It was very difficult terrain for tracking. The spoor (any sign of animal activity) was difficult to find. The grass was tall and there were very few bare patches of ground. We went around in circles for two hours finding hardly any signs. We drove into copses we thought we would never get out of. It was getting dark. Stephen asked if we wanted to do just one more circuit. We said ‘no thank you, we will stop for sundowners’. Okay, I suppose that we were disappointed but you can’t win every time and the tracking was very informative and great fun. There were two other vehicles in the area looking. They stayed out well after dark and never found her. Cheetahs 1, Homo sapiens 0. 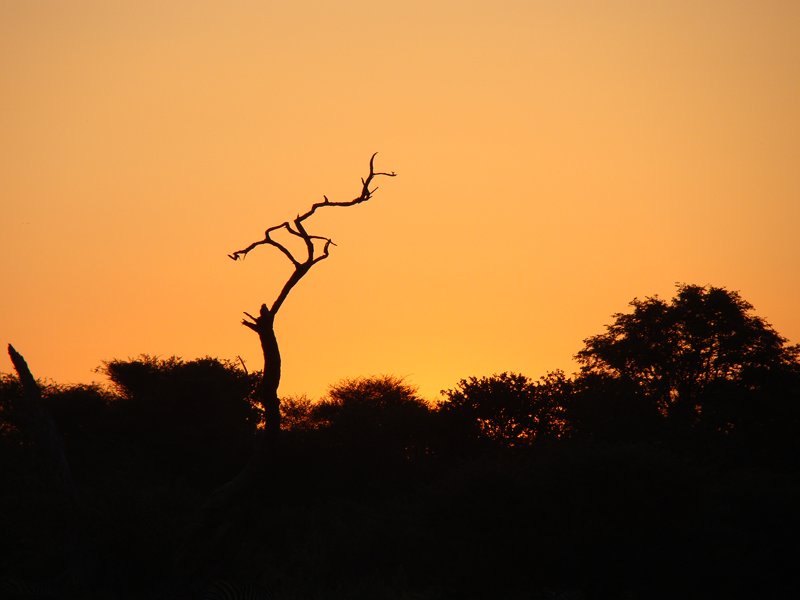 After sunset we set off back to the camp. On night drives the tracker perches on his seat on the bonnet and sweeps a spot light around the bush to try to spot any nocturnal activity. These guys have incredible eyesight. Considering that you are moving along at about 10 km/h and bumping all over the place they seem to be able to spot a tree frog from about 500 metres. All of a sudden he said, ‘stop’. He had spotted a pair of eyes in a bush right alongside the track. There, just four metres away, was an incredibly beautiful young male leopard. He was almost hidden, just his eyes were showing. We sat there for about 5 minutes as he crept out of the bush very slowly, very carefully, stalking his prey. 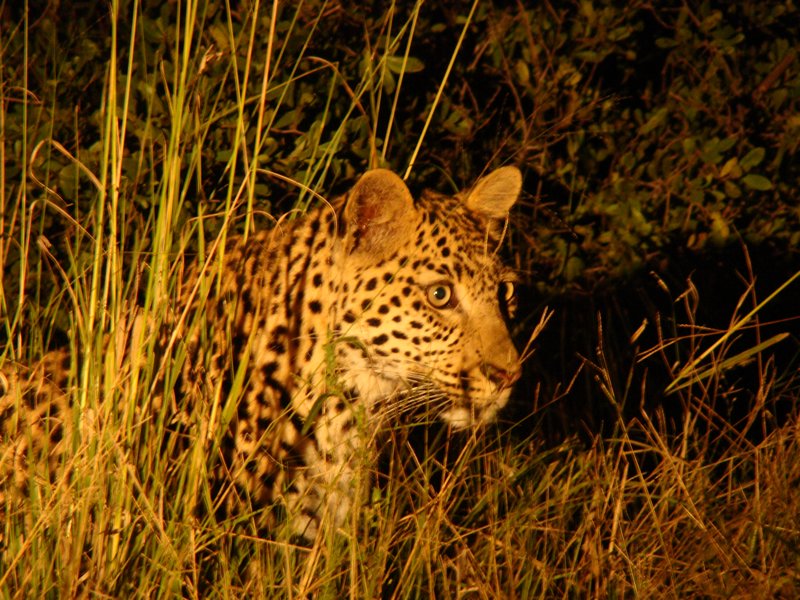 Safari at night in Botswana

We couldn’t see what it was but it was fairly small, maybe a hare. Slowly, slowly, he stealthily moved forward then all of a sudden he pounced. It was an incredible display of how these large cats can be so quiet and move so slowly and then with such speed attack. Anyway he missed! He slunk of into the bush his shoulders drooped in embarrassment. 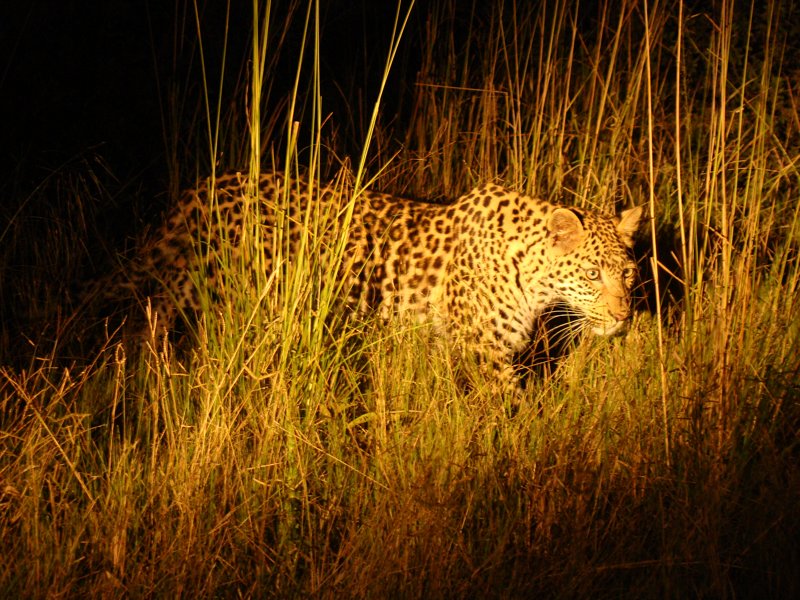 Stalking on a night safari

The leopard (Panthera pardus) as demonstrated is known for its grace, power and elusiveness. At about half the size of a lion an adult stands 80 cm at the shoulder weighing 50 to 90 kg. It is often confused with the cheetah but as mentioned earlier the cheetah has tear marks below its eyes, the leopard does not. Also it has ‘rosette’ like spots whereas the cheetah has solid dark spots. Leopards are solitary and nocturnal and very difficult to spot so we were incredibly lucky. Zoologists have only recently really started to learn about this cat. They are so sensitive to noise that even the click of a camera can frighten it away.